If you've ever watched a talk show, followed the news or heard a speech, you've probably encountered fallacies before. Fallacy: The Game lets you use them for entertaining, absurd and/or ruthless debates with friends and family. To win, you will need tactical and improvisation skills as well as a bit of luck. Fallacy: The Game is for everyone who loves a good debate, fruitful exchange of ideas or wants to improve their persuasiveness. Those who are involved in politics or deal with media in their professional life will also recognize the cards in their day-to-day life.

Fallacy: The Game also helps teach critical thinking, with many cards touching on logic, psychology, ethics and statistics. When is an analogy a lame comparison? When does correlation imply causation? What makes a question loaded? Not only can the cards help understand these arguments and what they rely on, they also practice wit and help illuminate a topic from multiple perspectives. Whether you discuss tax policy or whose turn it is to do the dishes, Fallacy: The Game is here to help.

„Pretty cold today.“ — Changing the subject is intended to end or interrupt a discussion and is is usually a sign of disinterest or a lack of arguments. 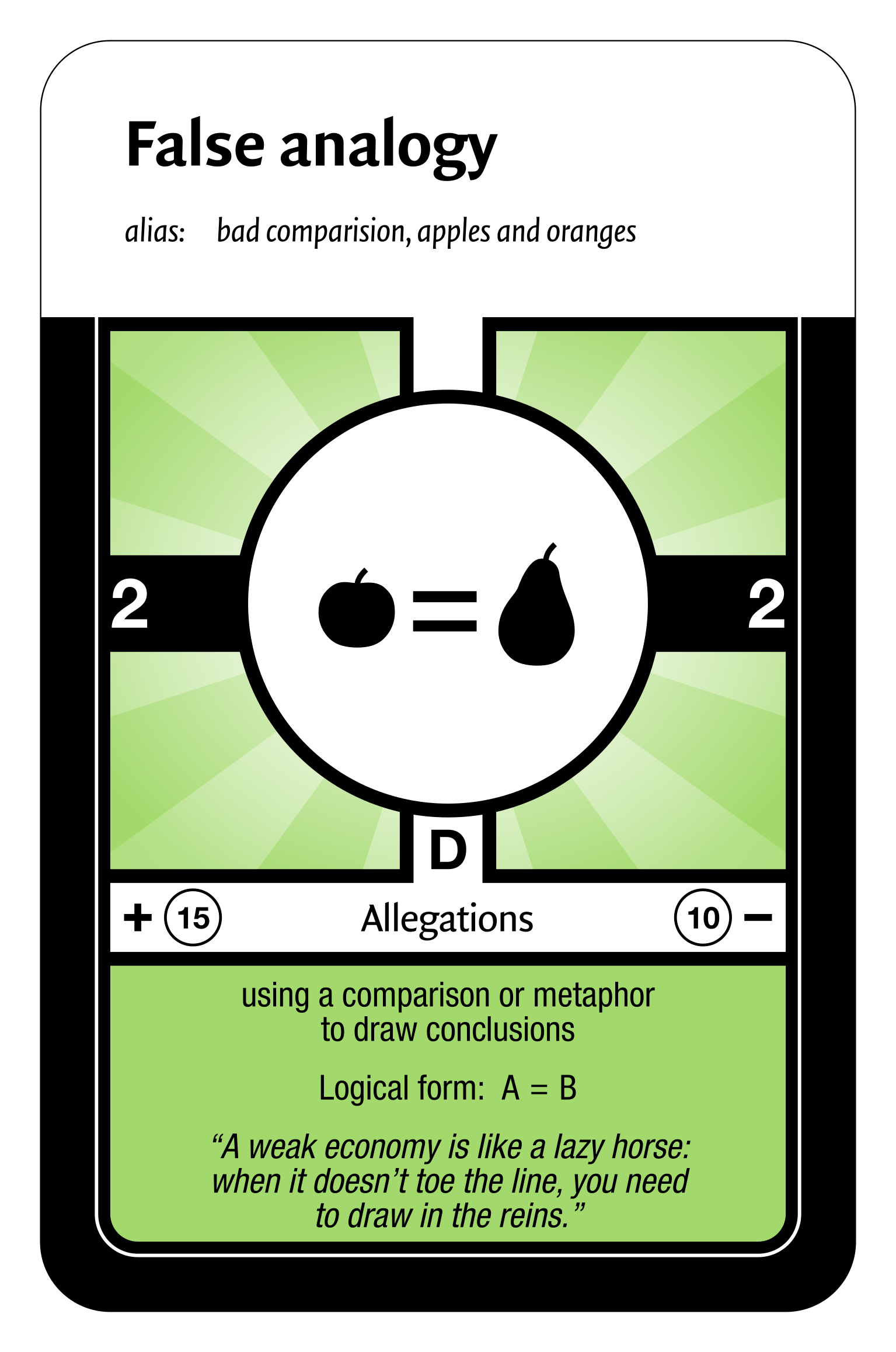 „A weak economy is like a lazy horse: when it doesn't toe the line, you need to draw in the reins!“ — An analogy is false when experiences or solutions from a situation get transferred to the subject matter despite fundamental differences, or with no meaningful basis for the comparision. 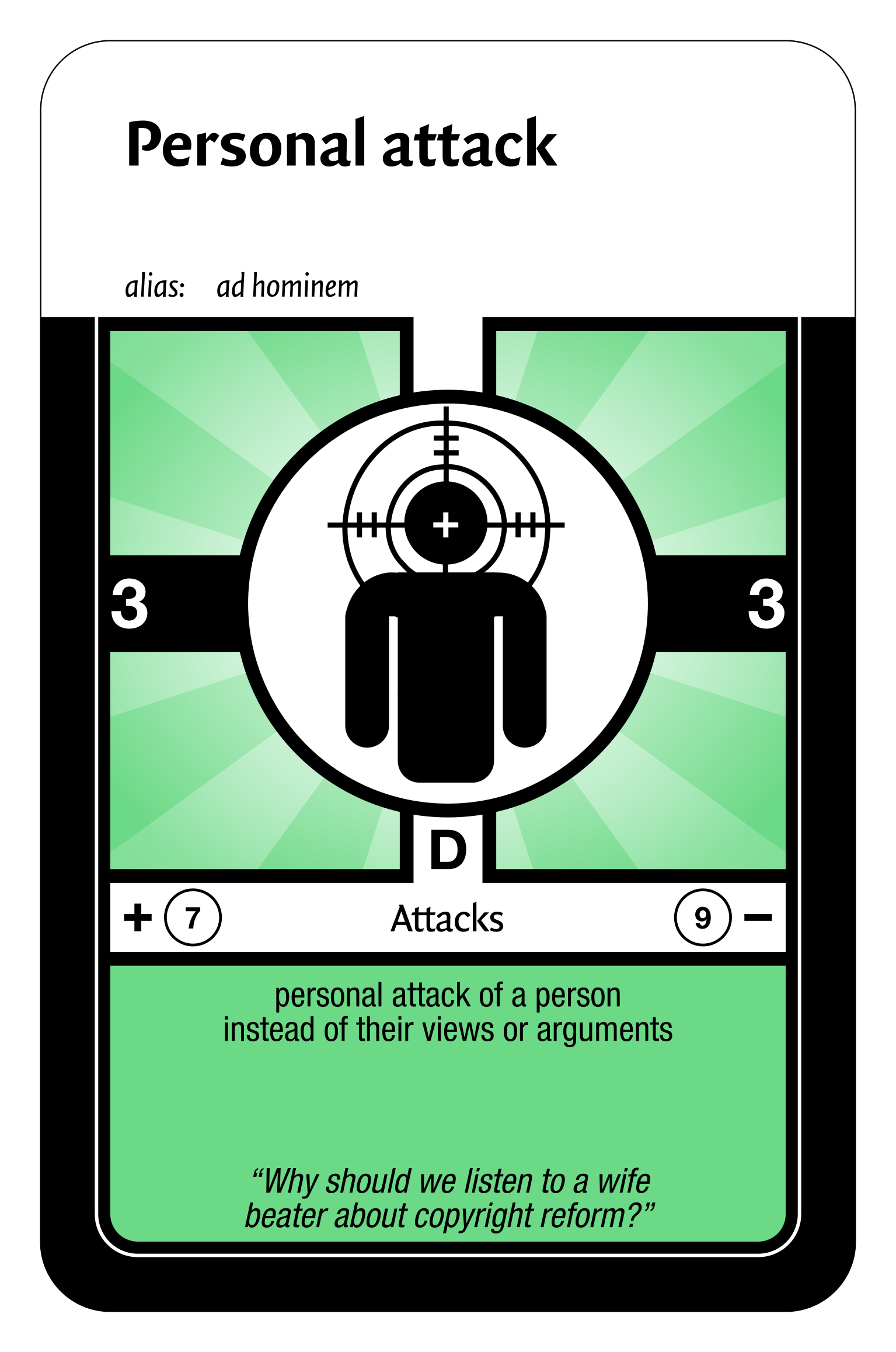 „Why should we listen to a wife beater about copyright reform?“ — Instead of criticizing arguments, this attack targets the opponent directly and personally. 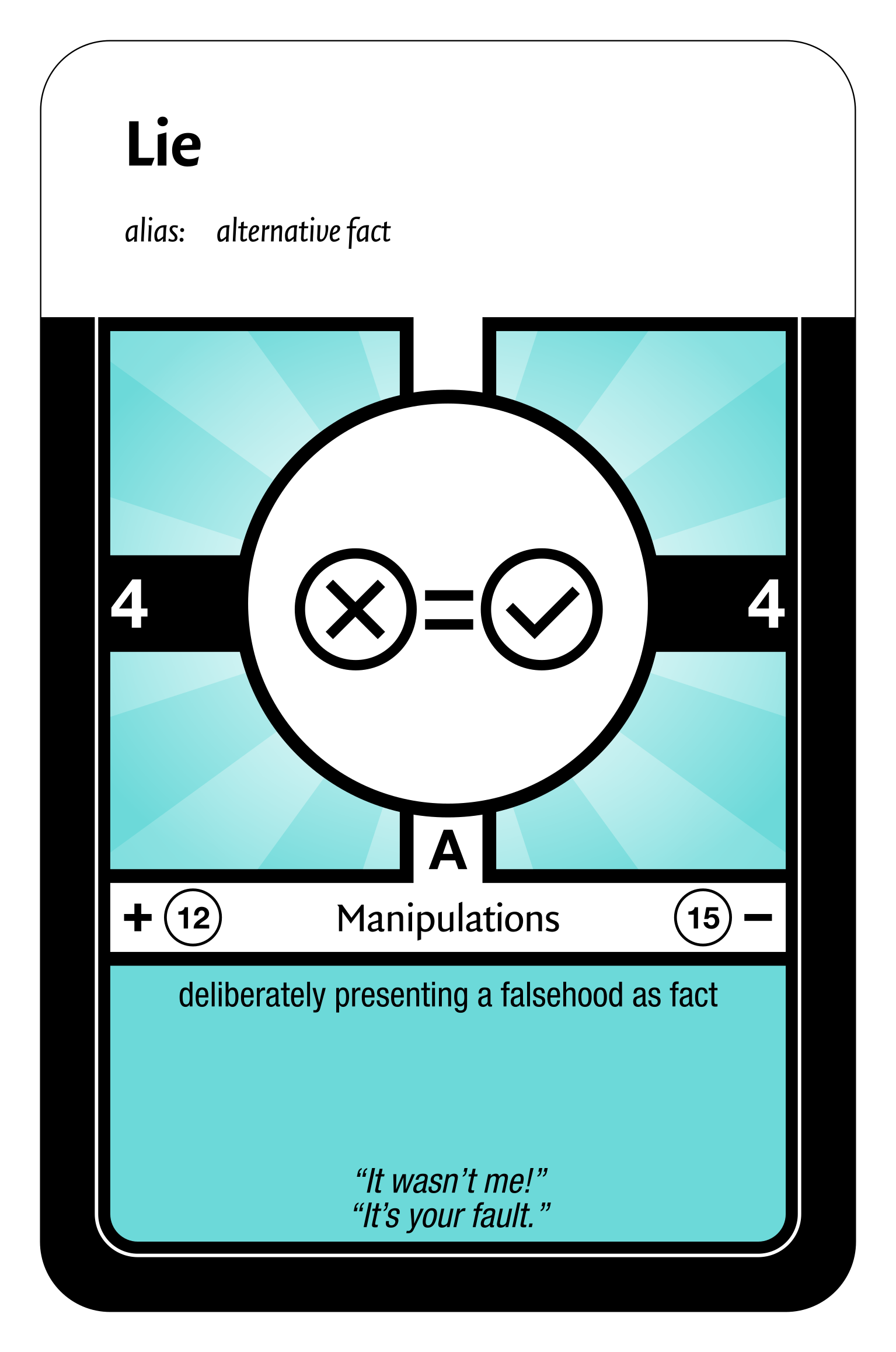 „It's not what it looks like!“ — A falsehood becomes a lie when someone who knows it's untrue spreads it. That makes it a perticularly malicious form of manipulation that abuses the trust of the other person. 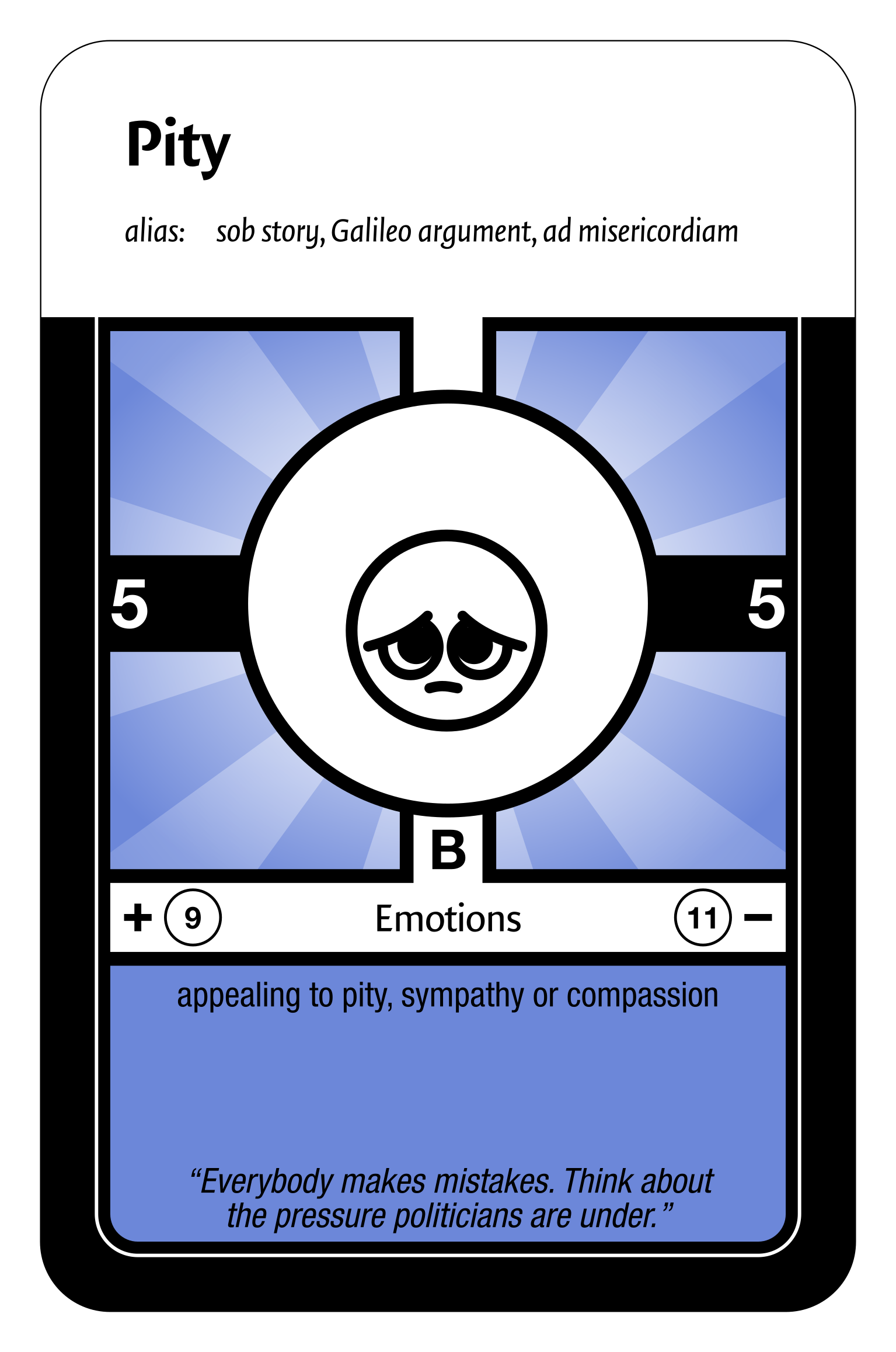 „Everybody makes mistakes. Think about the pressure politicians are under!“ — Appealing to pity is supposed to excuse mistakes or prevent criticism. Who enjoys causing suffering? 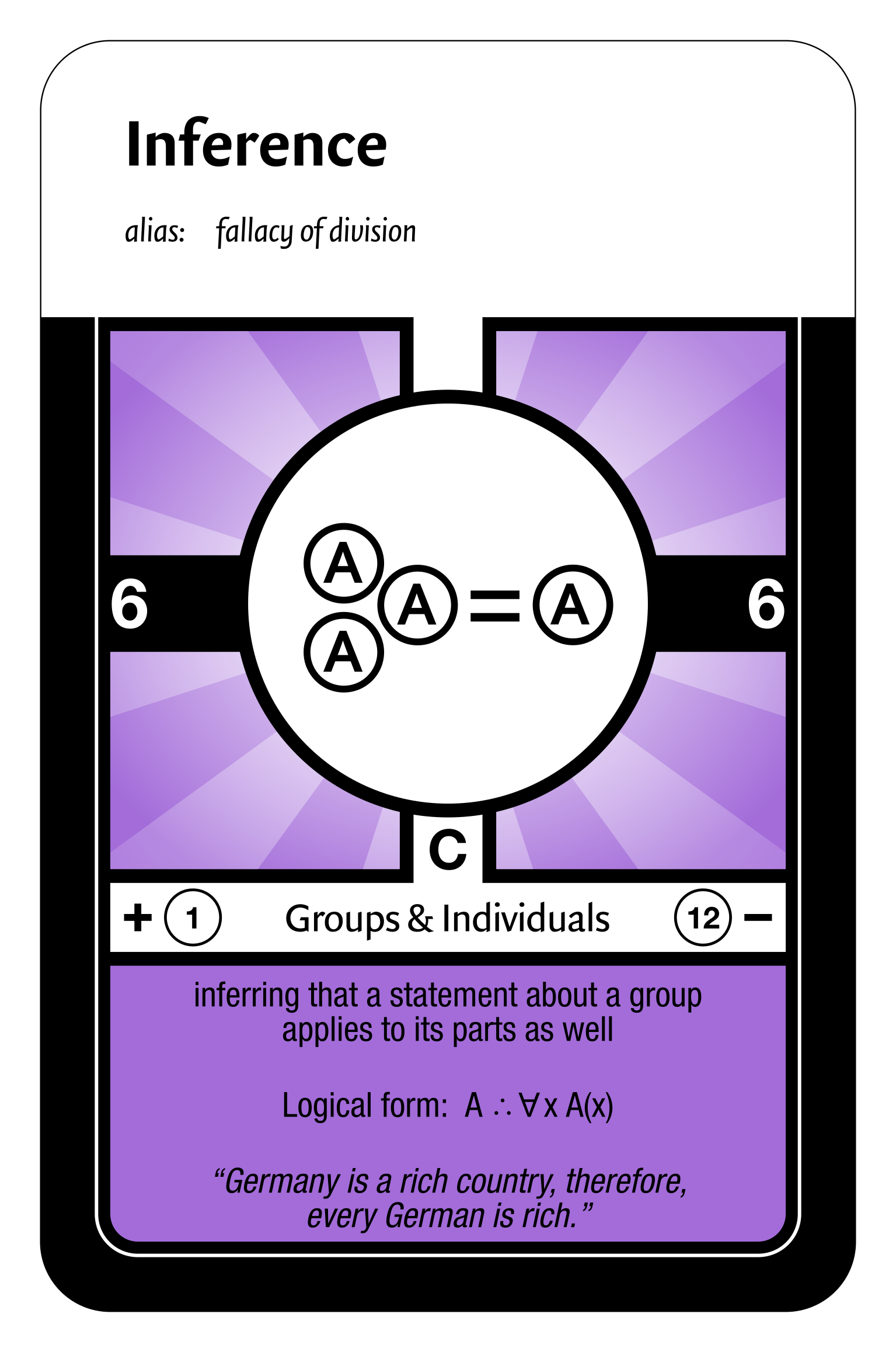 „Germany is a rich country, therefore every German is rich.“ — To infer a statement about an individual from information about a group as a whole is also a form of prejudice. 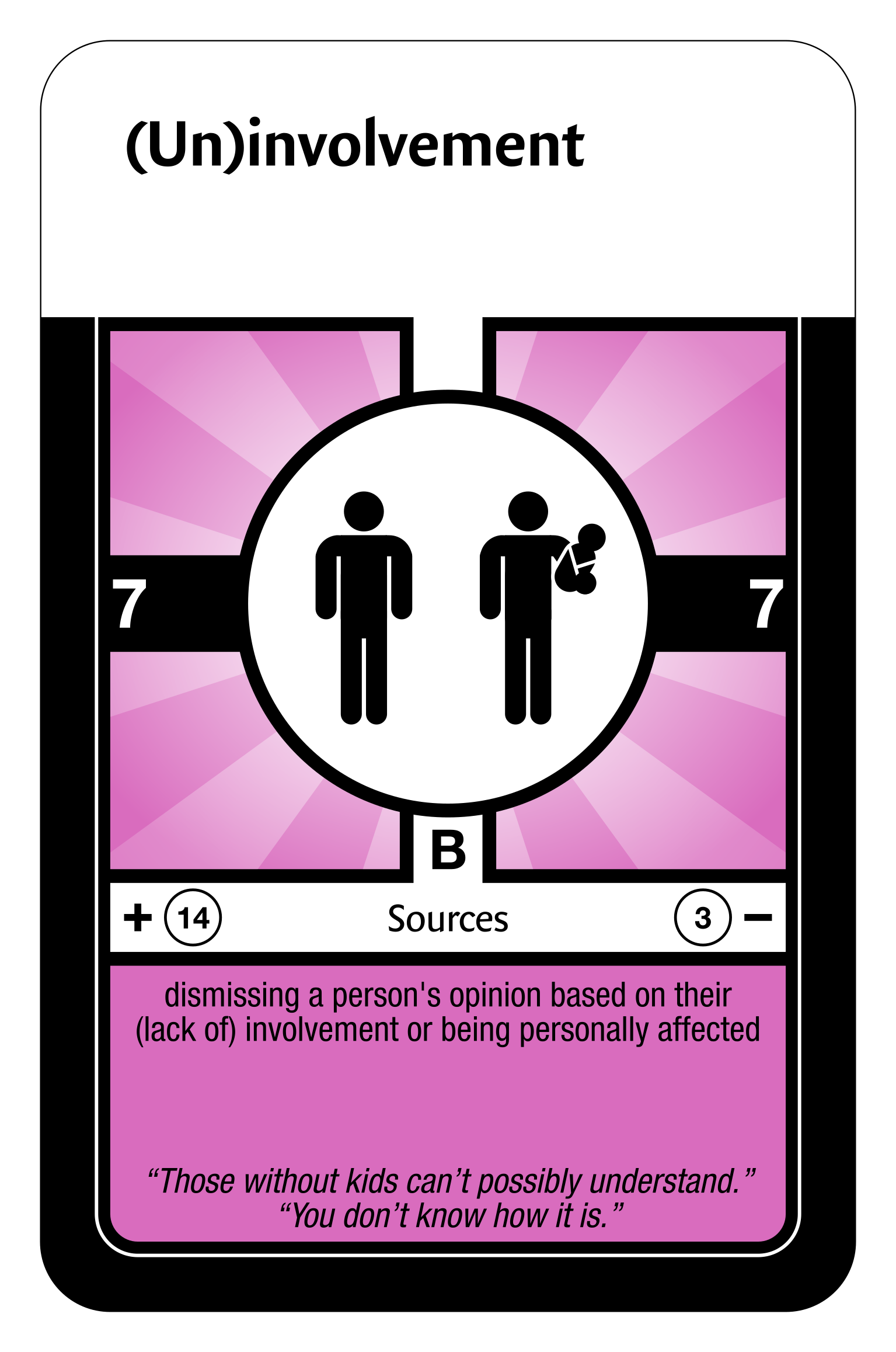 „Those without kids can't possibly understand“ — The reproach here is that someone without personal experience isn't qualified — or in reverse that someone personally affected isn't objective. 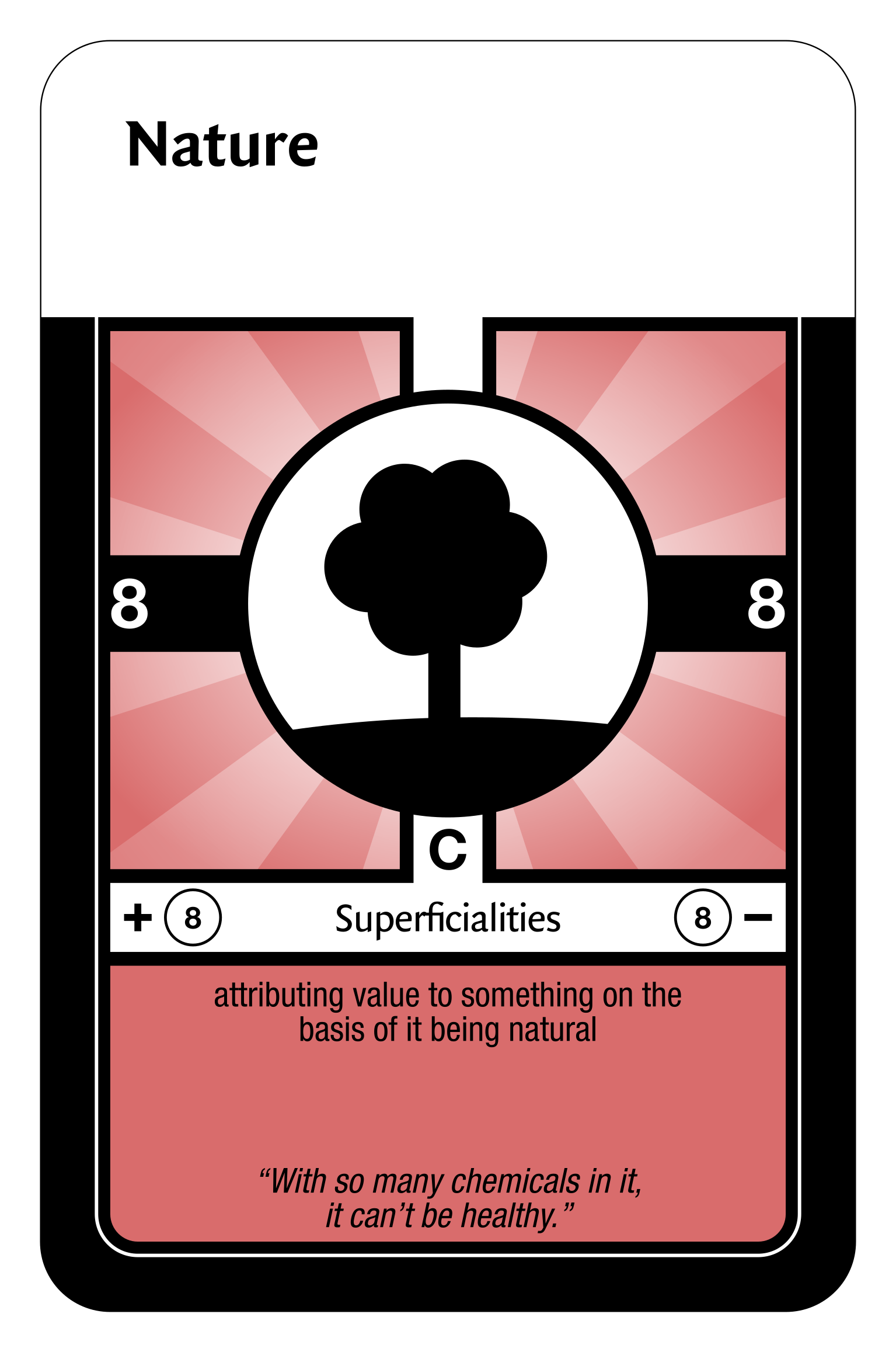 „With so many chemicals in it, it can't be healthy.“ — An argument from nature assumes that only what is natural can be good or true. 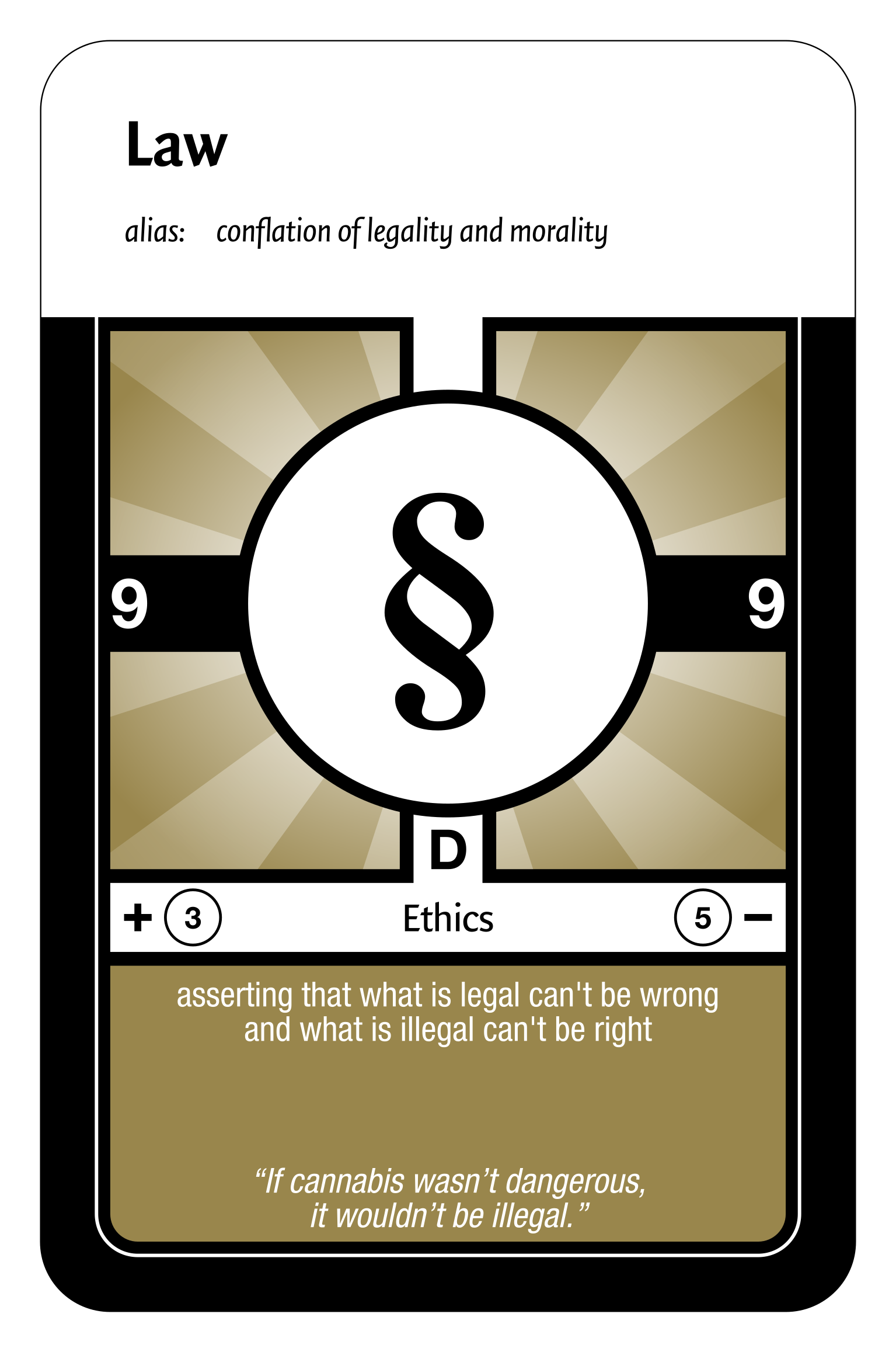 „If cannabis wasn't dangerous, it wouldn't be illegal.“ — Inferring morals from law is strictly speaking a mistake of cause and effect. Laws are (mostly) based on the morals of their time, but aren't tied to laws. 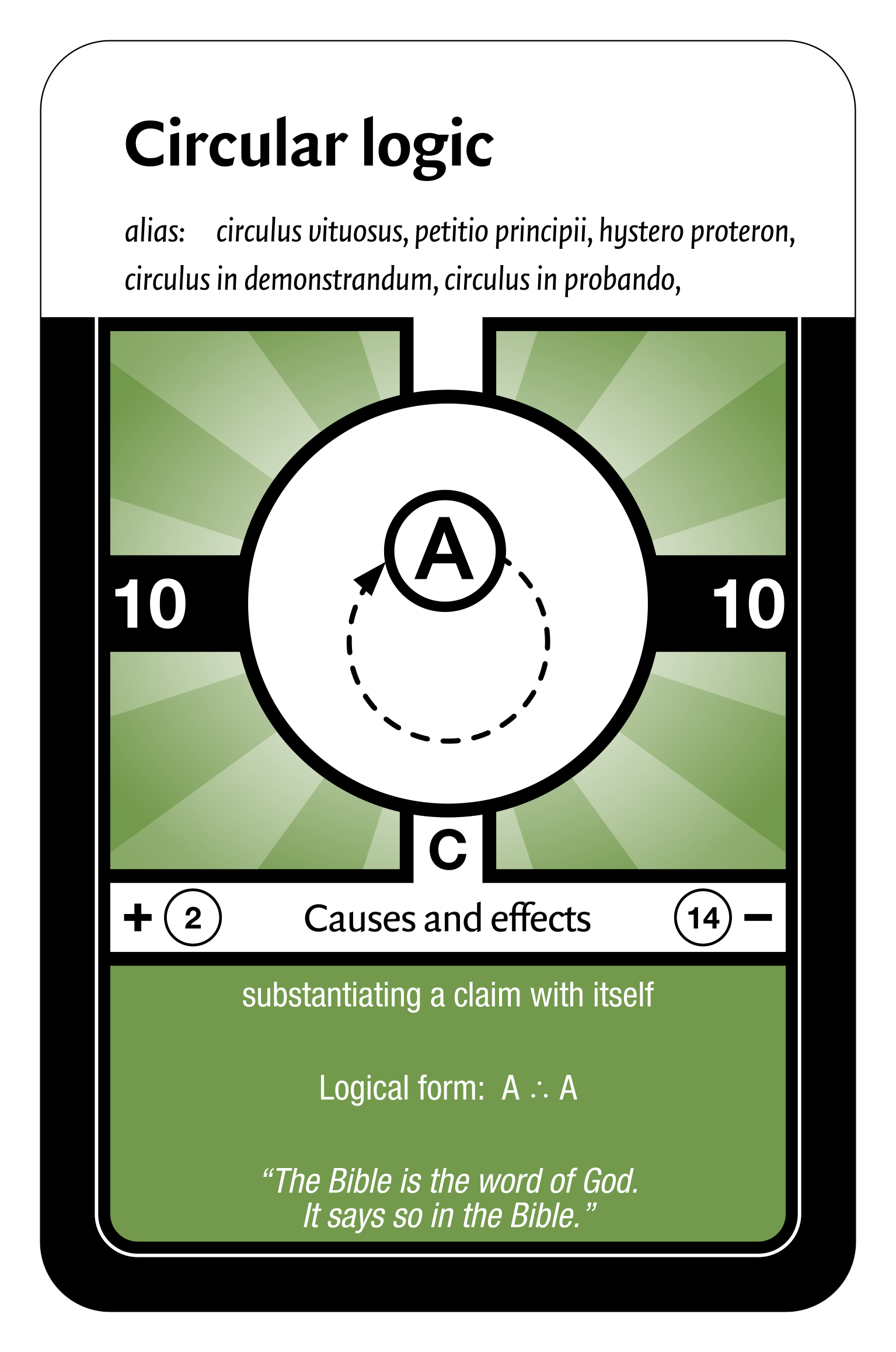 „The Bible is the word of God. It says so in the Bible.“ — In this classic argument a statement, argument or source is used to justify itself. 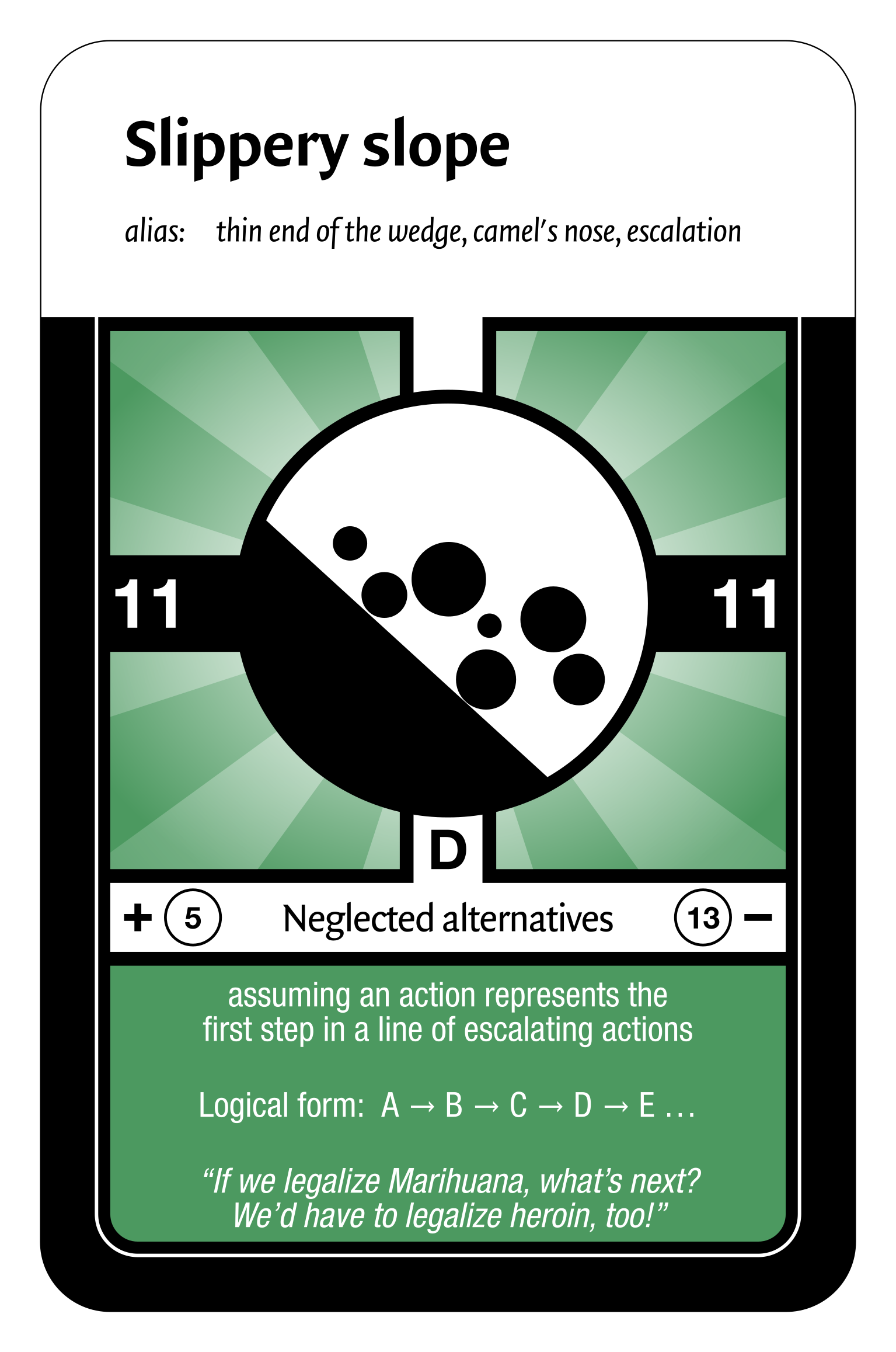 „If we legalize marijuana, what's next? We'd have to legalize heroin, too!“ — a slippery slope argument assumes that an action will inevitably lead to a whole chain or increasingly drastic actions.

„There must be a life after death, otherwise life would be pointless.“ — Wishful thinking is a form of reasoning that is solely founded on the wish for its truth. 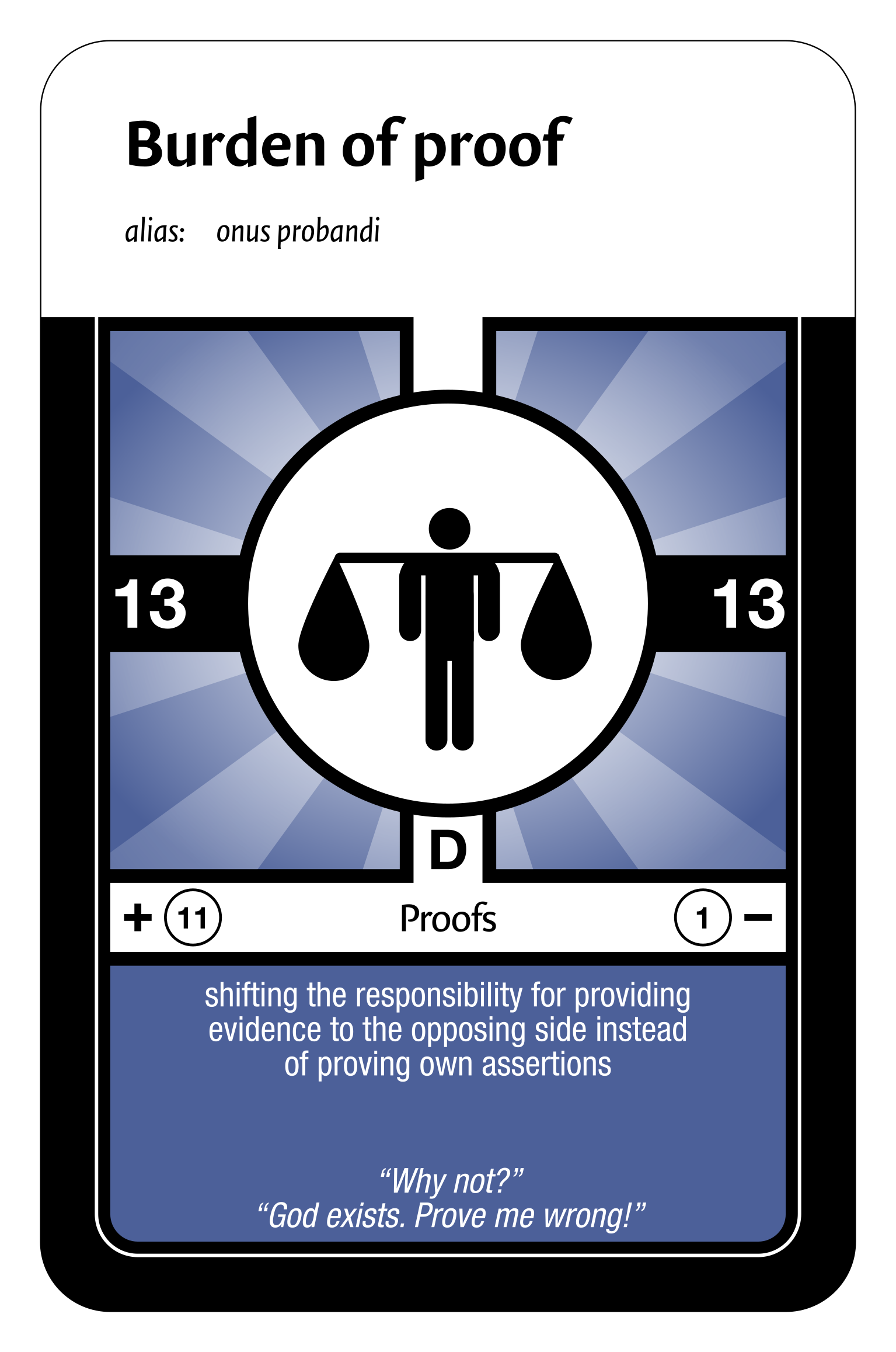 „God exists. Prove me wrong!“ — The burden of proof assumes an obligation of the other person to provide evidence for their position, or refute the opposite point. It can be used as a comfortable option to make claims without basing them on facts, leaving this task to the other person.

„The sun is supposed to be bigger than Earth? That tiny spot?“ — When arguing from ignorance a statement gets rejected for seeming improbable, incomprehensible or unbelievable. 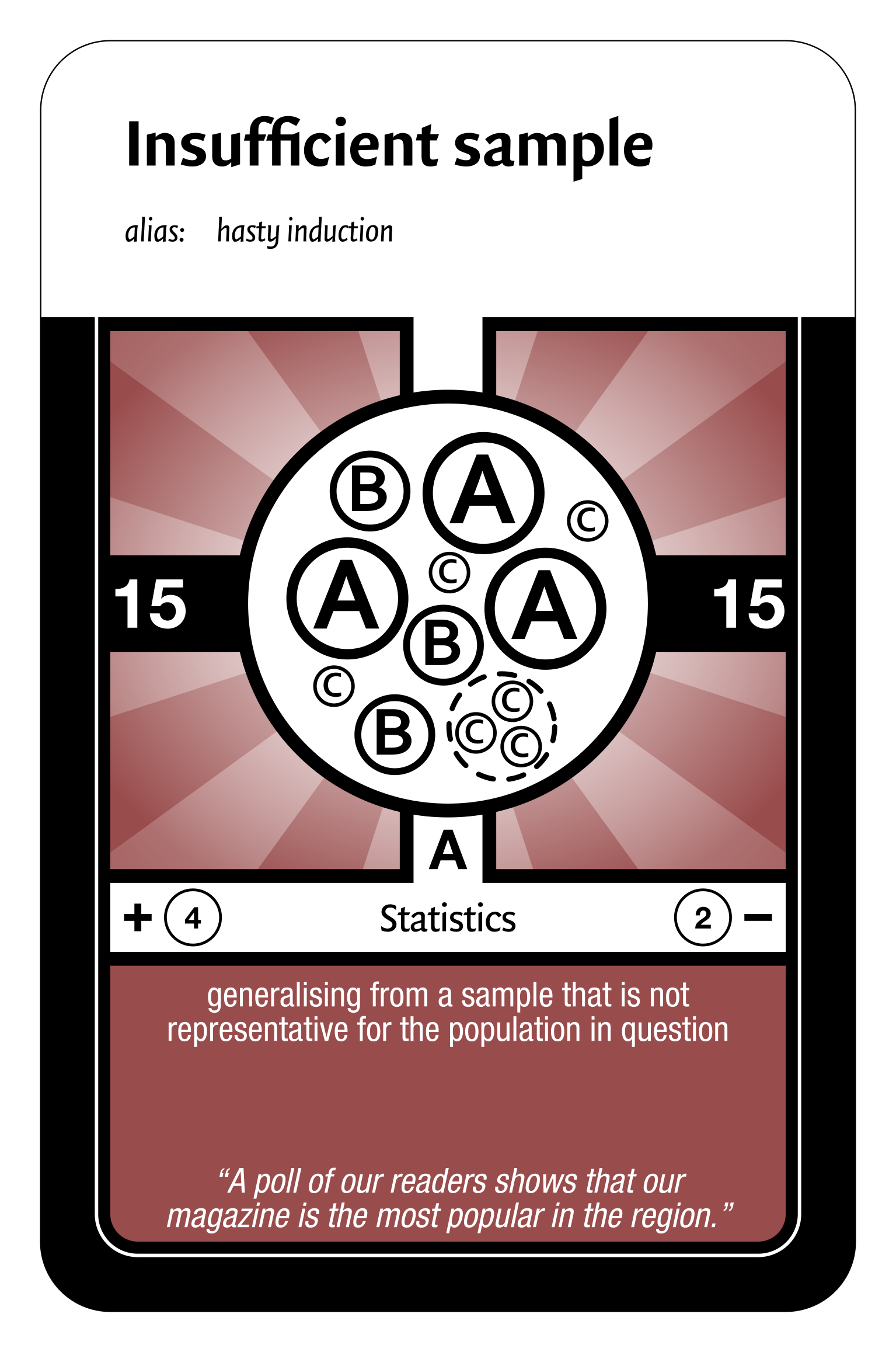 „A poll of our readers shows that our magazine is the most popular in the region!“ — A sample is not typical when it has systematic differences from the population it is supposed to represent. Generalizing from such a sample leads to bias.

There are 16 categories with 4 cards each, roughly in order of complexity (so you can make the game easier by omitting higher categories). Each card has a title, description and an example given. Many arguments are also known by multiple titles, which are listed as aliases, and some can be expressed with logic symbols. The category an argument of this type can counter well, and the one whose cards are great counters to it in turn, are noted as well.

From change of topic to generalization, to lie, tradition, spurious correlation, wishful thinking and insignificance, we have collected everything that can be used to argue for a point of view. You might find some real-life arguments fit more than one card, or don't quite fit perfectly - but in a game of bad arguments, bad pattern-matching is par for the course. 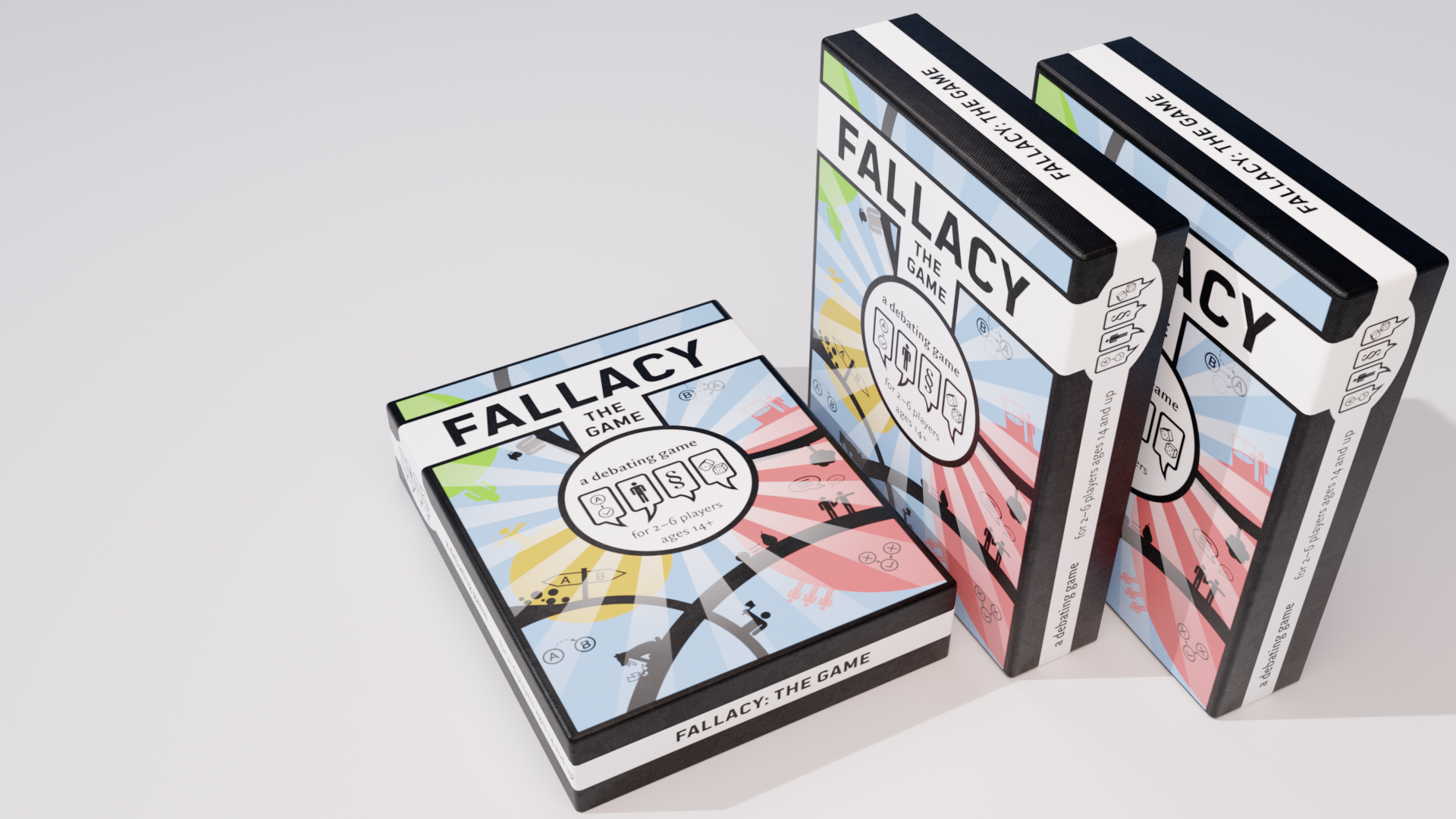